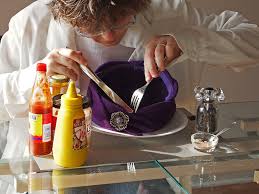 Should I Eat My Hat?

You remember that old colloquialism, I’ll Eat My Hat, if… Last week I was talking about how important it is for the press to cover OTHER news, you know, news that MATTERS. I was, wait for it, another colloquialism, Called to the Mat, for saying any tidbit about the President Elect should be considered news. But I humbly disagreed.

But this weekend after an A-lister (or 2) spoke out at an awards show about the President Elect, without ever mentioning his name, I knew this would be big news, and that the tweets would fly. But what about the Florida airport massacre? The shooter was to be in court today. And what of the shooter from the church in South Carolina whose fate will be in the jury’s hands in one day? Or the 4 Black Adults who beat a Mentally Disabled White Man senseless and tortured him on Facebook live?

All I am saying is these stories take precedence, in my opinion. A reporter even asked at today’s White House Briefing (which we thankfully still have for a week or so), what the POTUS thought of Meryl Streep’s speech. Really? I get it, your publisher wants you to be first, jump to it and ask the question. But this story is the kicker at the end of a newscast.

When I was a younger writer, I remember my news director ordering us to never report on suicides or gang violence, why? Because in Los Angeles, (sadly) that happens every day. So I submit to you, the President Elect will probably tweet out something someone doesn’t like every day. So why publicize it?

What do you think? Should I eat my hat?