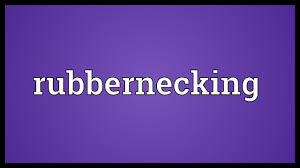 Many months ago, say, in January of 2017, I heard a radio talk host saying “I can’t even go to the bathroom or I might miss something”. And it hasn’t changed.

I spent countless days and hours back then on twitter, watching for something I might miss. And yes some of the folks in the early days were total fake news, we’ve all learned (hopefully), how to weed them out. Now I believe I’m at a normal pace, for these times anyway.

By now, we’ve all got our adrenaline suits on and we’re riding the wave of the news of THAT day. It’s not like the old days, when a news story happened, it was in the newspaper, we would see follow up stories and we would find that one story so interesting, we’d follow everything about it.

Now there are numerous stories all happening at once, at break neck speed. Just as you’re watching one story unfold, there are 3 lined up behind it. As you find one story so interesting, you suddenly realize there are two others that are even more interesting, compelling or downright frightening, you can’t take your eyes away. But what about that other one? You slowly turn back to it, but then peel right back around to the latest drama of the day.

Remote News Service mostly provides local news. But many of our clients also like a major National headline here or there. So that’s everyday now. How do you pass by the story of the longest “partial” government shutdown in history (where workers are told to side-hustle by having a garage sale or finding a house-sitting gig, like that can pay a college tuition or mortgage?). Or hey, did you hear about the one where our President was being investigated by the FBI for possibly being a Russian “asset”. But then what about using Calif. and Puerto Rico disaster recovery money for the border wall, that was only like 2 days before. And only a few months before was that dead journalist in Turkey. And what about months before that, the historic summit with the North Korean leader, those Chinese tariffs, the Royal Wedding (meh, child’s play), the compelling story of the boy’s soccer team trapped in a Thai Cave, or just last month that Tsunami that killed hundreds in Indonesia, the deadliest and most destructive wildfire in Calif. history (also the costliest in the world last year), last month!

Are we immune to the many, many daily stories that have us running from Cable News to the Internet, to a newspaper or a local news show? We must stay alert, because we might miss out, and for god’s sake, don’t go to the bathroom!